REVIEW: Does the Versed Dew Point Moisturizing Gel Cream Give the Hydration Your Skin Deserves? 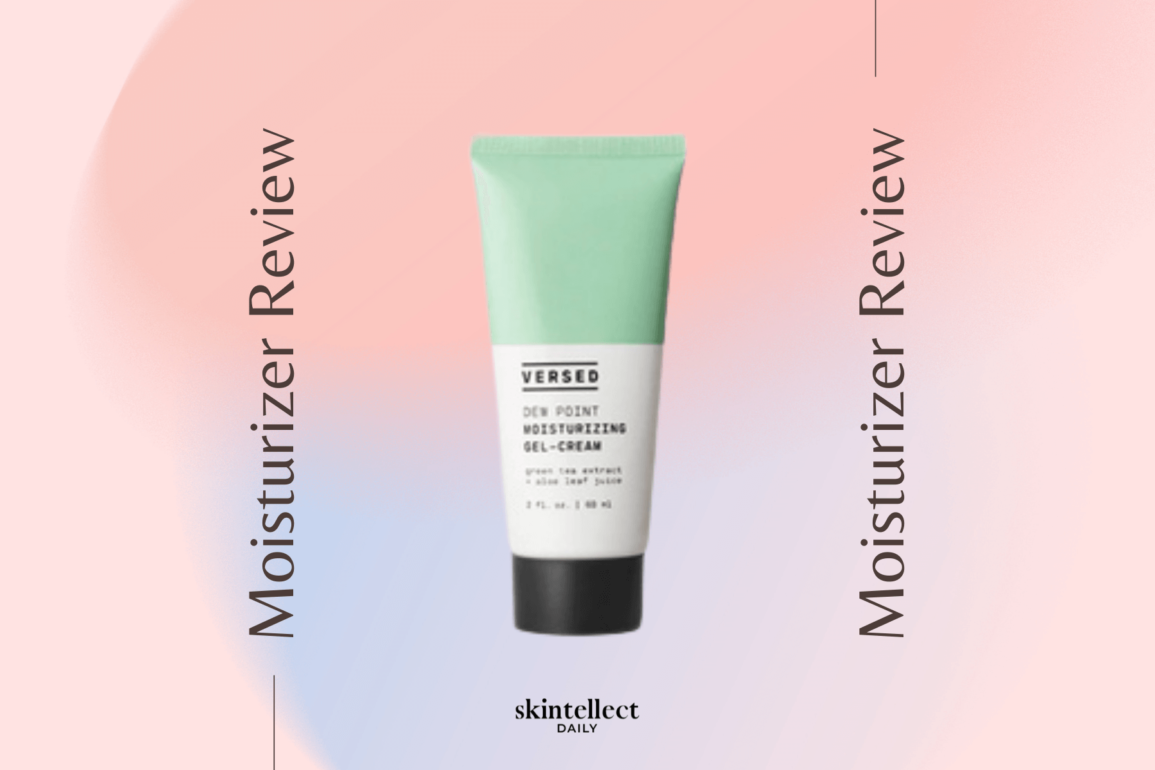 Home
Products
Moisturizers
We feature products that we think will be helpful to you, our readers, and these are selected based on our careful research. As an Amazon Associate, Skintellect Daily earns from qualifying purchases.

Meet your new moisturizer match if you want to keep your skin hydrated but don’t like the feel of traditional cream textures. Do you want bouncy skin? If yes, then the Versed Dew Point Moisturizing gel cream could be the best face moisturizer for you. This lightweight, jelly-like moisturizing gel cream absorbs quickly and disappears into your skin, leaving it feeling refreshed but never greasy. Basically, it’s ideal for the warmer months when heavier moisturizers tend to clog your pores—or if you have oily, breakout-prone skin all year.

Sodium hyaluronate (which, like hyaluronic acid, helps draw in and retain moisture in the skin) and aloe leaf juice hydrate, while green tea’s natural antioxidants soothe skin, fight damaging free radicals, and reduce inflammation. The best part is that this daily moisturizer will not clog your pores. One Dew Point is sold every two minutes for a reason.

Versed is positioned as the sister brand to the company’s Who What Wear clothing line, which is sold at Target, and thus Versed is available there as well as at other retailers.

Versed’s philosophy is simple: provide affordable, effective skincare products that are both vegan and, in the words of the brand, clean. “Clean” is an ambiguous phrase in the beauty industry that lacks a standard, regulated definition (it varies from company to company), but in this case, it means that Versed’s products contain no so-called “toxic” or “questionable” ingredients.

While some of these ingredients, such as formaldehyde and artificial fragrance, should undoubtedly be avoided, others are labeled as harmful based on outdated research, poorly designed or inconclusive studies, or simply anecdotal evidence, rather than the conditions (or concentrations) under which these ingredients are actually used in real-world skin care applications.

Aside from that, Versed has an appealing aesthetic that complements its clean philosophy: pastel-coloured packaging with plain type that explains the purpose of each product and highlights key ingredients in each. Versed products are generally packaged to protect their light- and air-sensitive ingredients; however, there are a few instances of clear and jar packaging that compromise the benefits of some ingredients, particularly antioxidants.

Versed’s formulas are a mixed bag. Some contain a plethora of beneficial ingredients that completely avoid irritants. However, some of the ingredients are good but basic while others contain fragrant plant extracts and oils that may irritate skin (and let us be clear – fragrance, both synthetic and natural, can irritate the skin). The products are best judged on a case-by-case basis due to the hit-or-miss nature of the line, which requires more examination than simply choosing based on product claims and skin type.

Also considered among the best face moisturizer for men, this fragrance-free moisturizer has a gel-cream texture and is packaged in an opaque squeeze tube that protects its beneficial ingredients from light and air.

It has a rich but lightweight feel, making it suitable for those with normal, dry, or combination skin (those with oily skin might prefer a thinner texture with a more mattifying finish). It absorbs quickly into the skin, leaving it plumped and restored with no sticky or tacky residue.

If you like to supplement your daily moisturizer with serums or powders, this gel cream lends itself well to both serum and powder formulations.

The Versed Dew Point Moisturizing Gel Cream has dependable humectants and plant-derived antioxidants, such as fatty acid-rich squalane, jojoba oil, aloe, wheat germ oil, green tea, and elderflower. As advertised, it contains skin-plumping sodium hyaluronate, though it’s near the bottom of the ingredient list, so you’re not getting as much as the claims suggest.

Below mentioned are the key ingredients:

“What first attracted me to Versed Dew Point Moisturizing Gel Cream was the impressive list of ingredients that let me know that it was capable of way more than just hydration.

From its cool, refreshing texture to its lineup of potent ingredients that I swear I can feel working on my skin, I strongly recommend anyone in search of healthy hydration scoop up some Versed ASAP. “

This is what Sarah has to say about the product:

“A great option for anyone looking for a lighter moisturizer during the summer months and if you have oily/combination skin. If you have dry skin you may prefer to opt for something richer or to alternatively follow with a facial oil to lock in the moisture.“

We searched the internet to learn what people had to say about the Versed Dew Point Moisturizing Gel Cream in order to provide a more comprehensive review. Here is what we discovered on Reddit and Twitter.

Overall, we would suggest you buy the Versed Dew Point moisturizing gel cream because they last a long time, are inexpensive, and do not irritate sensitive skin. It also helps clear up acne and reduce the production of oil on your face.

Read also: Our reviews on The Ordinary Moisturizer and Clean and Clear Moisturizer.